Tag Archives: The Squid and the Whale

Artificial can be real

Sick days have their benefits; such as catching up with design work for the upcoming project for Uni, doing further research for dissertation and generally doing things in my own pace, not stressing out, relaxing as much as possible – with copious amounts of tea and excellent literature and a film or two tossed into the mix, for the heck of it. I went through all of the Harry Potter films (first time ever!) when my fever was too high to think anything more intellectual and all I want to do is scream episkey or whichever spell that would clear my sinuses. Then I saw the Wolf of Wall Street and honestly felt nearly sick to my stomach just from over-the-fricking-top carousal. 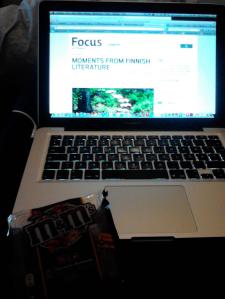 Then today I wanted something more stimulating. Interesting, if you will. And first I saw Frances Ha, although I have to admit it failed to grip me in any interesting way, despite how I usually love Noah Baumbach‘s style (The Squid and the Whale is one of my favorites, which I saw years ago at Dublin Film Festival whilst studying film at DBS). I ended up spending much of the film time with fidgeting about with InDesign and my project (and browsing Reddit once in a while…), not paying much attention to the film. Shame, I’m sure it’s really good. Just wasn’t for me, not today.

But then – I just finished watching Her. Spike Jonze’s (creator of greats such as Being John Malkovich and Adaptation) visualisation of a future where people and computers work side by side, comfortable with one another. Where the world hasn’t (yet) been overtaken by the master mind machinery and technology but rather, the computers are colleagues, friends and partners; like another human being, sitting in the next cubicle. Luckily, Jonze doesn’t go overboard with the futurism, and sticks to simple hints of advanced technology and bigger, edgier buildings counter-balanced by the rather 50’s styled costumes. Theodore (Joaquin Phoenix), heart-broken and cocooned in sadness, but loved and lovable protagonist, ghostwrites letters; beautiful, personalised, heart-felt letters that a layman would not be skilled to write. That’s his job – dictating beautiful words to a computer that prints the letters in the individuals own handwriting. So far seems rather dull. I start fidgeting again. InDesign, now that I have learned how to use it (thank you, Laura), and want to make the best possible job.

Then Theodore installs a new program. A hyperintelligent operating system that is designed to make his life easier, to provide him assistance and to anticipate his needs. And now the smouldering voice of Scarlett Johansson fills the screen, in the role of Samantha. The emotionally void Theodore, surviving through the pieces of his failed marriage, Theodore and Samantha quickly build a rapport. A rapport than rather surprisingly develops one night into love-making, and the love-making turns into a relationship.

Now, loving a physical object is not that surprising – I definitely have a strong connection with mixed emotions with each my bookshelf, my film collection, my MacBook and my easel – but what is surprising, is how no one (par from the ex-wife, who accuses Theodore of always having wanted a relationship with a machine in order not to have to deal with the reality of physical woman) bats an eye on the relationship. Having an OS as one’s girlfriend seems to be a socially acceptable and even a normal thing, and Theodore is not alone in having such a relationship. Especially, with an OS like Samantha who has a personality with spunk and tenderness, keen eye and quick wit; and someone, who by her own words, is constantly developing learning. Ideal woman, right? Especially as Samantha is painfully aware of her lack of a physical body, and finds a woman who is willing to be the body for them. To be the physical representation of Samantha, so Theodore would have someone to touch, hold and make love to. Ultimately, though, that proved to be too strange for Theodore – the girl wasn’t Samantha.

A love story like no other. But in no means is it strange. That’s the strange part. Their relationship is like any other. With the first highs of being infatuated to the point of nauseating, spending all free time together, falling in love. Then the first cracks appear, and bit by bit the relationship slides towards the growing apart bit that is the end of many relationships.

This soulful, captivating retro-futuristic film had me from Samantha’s first introduction till the end glued to the screen. Admiring the beautiful cinematic storytelling of Jonze, a brave take on how technology is becoming more and more part of our daily life, and how ultimately we learn to accept that and not be afraid of it. Even accepting it as our partners in life. Artificial intelligence seems that much more real and palpable; and when (or if?) it becomes part of our reality, will we believe the OS/AI’s are just mimicking us, or are they actually learning and developing despite us? It is the constant balancing out and flipping over of what is expected, the general assumptions versus what is illusion and made up. An unconventional reality. The beauty of transition from technology to person, from friend to relationship and back to being alone shows Jonze’s command on the material, the inner investigation – a romantic film like any other, just one of the participants hasn’t got a body, but does that make it any less real?